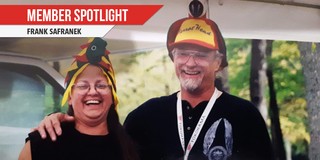 What started life as a simple sound effect uttered by some Nebraska Region American Sedan® drivers - who may have been a bit overly lubricated one evening - has evolved into an international phenomenon.

It rings across the paddock, crackles on Speedvision’s airwaves, sings amidst the pylon forests of an autocross lot and rings through meeting halls. It has spread like an Internet virus and has even been carried across the pond to the pubs and paddocks of the Misty Isles.

One February evening, stifling with cabin fever boredom, Frank Safranek, Tim White and Mark Beacom were fiddling with their AS Mustangs. Ostensibly they were preparing for the upcoming season but in reality it may have been more an excuse for camaraderie and barley pop. No one is really sure who uttered the first "WHOOMAH!" in imitation of the Mustang’s throaty response to a blip of the throttle, but it just sounded right. And it was impossible to say it without a smile.

"At first it just meant the guys were having fun. Then that everybody was having fun," said Frank’s wife, Christine, who in addition to serving as Nebraska Region RE for three terms also is something of a den mother to the Region’s AS racers. "Then they started using it as a greeting."

Other Nebraska Region members picked up on it. Neon drivers. Mazda drivers. Spec Racer Ford drivers. Autocrossers. Rallyists. Members with cars that hardly make a WHOOMAH! sound, but who certainly tuned in to the WHOOMAH! spirit.

Stickers seemed the natural outlet of expression. Nebraska Region member Stan Cisar offered to make them for free from scrap material at his Raceway Graphics business. Safranek laid the Mastic across the face and did the "weeding" of the nonessential vinyl. Soon the stickers began popping up everywhere. The Region even put them on all their autocross loaner helmets to identify them.

At the 1998 Runoffs®, maybe half the American Sedan field ran with a WHOOMAH! sticker mounted somewhere. Speedvision announcers Greg Creamer, David Hobbs and Dorsey Schroeder noticed and punctuated their commentary of the AS championship race with several exclamations of "WHOOMAH!"

Safranek estimates more than 400 of the stickers have been given away to date in a variety of sizes and colors. Requests have come from both coasts and many points in between. Everyone wants to get in on the fun.

This summer, the Safraneks made a pilgrimage to England, visiting several tracks and working as corner marshals - stark in their SCCA worker whites amidst the orange attire favored by the British marshals. They had brought several WHOOMAH! stickers along - by pure luck they happened to be orange - which were soon snapped up by the Brits. There is even WHOOMAH! adorning the Nissan Primera of BTCC Thundersports champion Matt Neal

What once was just a funny noise has evolved to become a way of life, a feelgood attitude, a joyous vocal expression of the principle that we are truly all doing this for only one reason: to have fun.

Try it. Say it out loud. Bring it up from the gut to explode with a 302-cubic-inch bark of authority. Feel the salutary effect as it bursts forth, leaving a broad grin in its wake.